Like many a seeker I found, lost, found and ultimately lost myself in Dharmasala.

I remember thinking that if I was to get a tattoo at that time, as a 19 year-old is want to, it would have been of a traveller with a cane over his shoulder, with all his worldy possessions tied into a handkerchief.

Fortunately I didn’t. It would have been a shit tattoo. 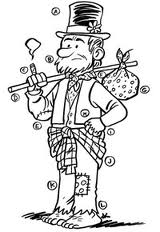 No, I wouldn’t have actually got this one, but you get the picture.

The reason – I was musing on self-sufficiency. I had been reading a load of the requisite ‘eastern’ literature. I’d realised, as so many had before me, that to be in control of one’s own emotions enabled freedom. To have that type of control enables one to deal with any situation, anywhere, with anyone.

For years during my youf, I never liked to be alone and chased company. Today, I love solitude – albeit it in moderation. Or at least I prefer no company to bad company.

Yet a while back I posted about not starting a business with partners.

My opinion has changed. I was wrong. Again.

I’ve spent the last 9 months working alone and achieved many things. Yet in the last few months as my business pivots, I’ve realized I need a partner, partners even. And as I begin to work with people, I remember the benefit they bring.

It’s possible to be effective alone, but as a social being, I believe that partnerships actually bring out the best. They help you to monitor your own mad thoughts, they create expectations and they keep one from disappearing into another rabbit hole of thinking.

The same could be said of my love life. Fiercely independent, I’ve preferred to remain alone rather than compromise. Yet I wonder if a relationships is, in fact, a more powerful place from which to grow. Scrap that, it almost certainly is. It’s easy to be alone – it prevents contradiction and challenges to one’s ‘way’. Yet, I’ve watched my friends become better people through the rounding that a relationship brings.

View all posts by Simpletom